While we are all focused on the COVID-19 pandemic, the Environmental Protection Agency (EPA) is relaxing its approval process for new pesticides, among 95 other environmental roll backs by the current administration. Now that the “protect” in EPA seems to have been dismantled, consumers need to protect their own health by purchasing organic foods and demanding transparency in our food supply.

Earlier this year, the Center for Biological Diversity issued a report that analyzed data on pesticide approvals in 2017 and 2018. The report found that the EPA is actively working against its own pledge to incentivize the replacement of older, more dangerous pesticides. “Included in the EPA approvals are 17 new products containing the endocrine disruptor Atrazine, which is banned across much of Europe; 4 products containing chlorpyrifos or methyl bromide; and 69 products containing a ‘known’ or ‘likely’ carcinogen,” the Center reported.

Atrazine is the second-most widely used pesticide in the U.S., mainly on corn and sorghum crops (sorghum is major source of feed for livestock). It is commonly detected in groundwater which was a major factor in it being banned in the EU. Atrazine is banned or being phased out by 35 countries.

Chlorpyrifos, an organophosphate, has been linked to brain damage and other health defects in children and has been banned in California and Hawaii. Chlorpyrifos is used primarily on crops such as alfalfa, almonds, citrus, cotton, grapes and walnuts. Under President Barack Obama, the EPA proposed a federal ban on chlorpyrifos in 2015. But the EPA reversed course in 2017 and allowed it to stay on the market. The National Resource Defense Council (NRDC) and other environmental action organizations have demanded and are waiting for EPA to ban chlorpyrifos and other pesticides, including atrazine. Read more on this here.

The Center for Biodiversity recommends that the EPA stop the approval of new products that contain the most dangerous active ingredients and take decisive action in phasing out the worst-of-the-worst pesticides (source: Toxic Hangover).

The EPA is also looking to roll back pesticide application regulations which will put more farmworkers and nearby communities at risk for exposure. And it gets worse - the current administration is trying to give the EPA Administrator the power to censor crucial scientific and health research at the EPA. This would severely limit the scientific research that the EPA needs to consider when setting environmental and public health standards. Click here to take action against rolling back public health protections.

One more pesticide/food issue of concern: you’ve all read about the increased use of pesticides on GMO crops, and now FDA is working with the EPA and USDA to “educate” consumers about the “sunny side” of GMO use via their Feed Your Mind initiative. 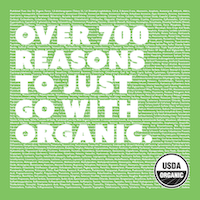 The good news is that organic agriculture is adhering to the same strong standards that they have always followed (see Are Pesticides Allowed in Organic Farming). It is not to say that organic food is completely free of pesticides, but a growing body of scientific research shows that eating organic food can reduce exposure associated with non-certified organic agriculture.

Among the many things that this pandemic has shown us is the close link of food choices to our health and well-being. Therefore, we have a shared responsibility to take scientific facts seriously and consider rethinking our value systems to get to a better future state once we come out of this crisis.

What can you do? If you manufacture foods or beverages, get your supply chain moving towards organic ingredients if you haven’t already done so. For manufacturers and consumers, contact your state legislators, contribute to an environmental action committee, and choose organic foods and beverages when you shop. Don’t be silent when it comes your food and health.

If you have questions about our organic ingredients, please contact your Global Organics Account Manager or email info@global-organics.com.