The world of chocolate has a language of its own which is often confusing for those buying chocolate/cocoa ingredients or even buying a chocolate bar. Here’s a quick rundown of chocolate/cocoa terms that you’ll see on labels and product specifications and what they mean.

Cocoa Nibs
Cocoa nibs are de-shelled (or de-husked) cocoa beans which have been crushed into small pieces. Nibs are approximately 50% cocoa butter and 50% non-fat cocoa solids.

After nibs are roasted, they are ground and milled, and the resulting material is called cocoa liquor. Liquor is pronounced “licker” not “li-core” and does not contain any alcohol. Cocoa liquor is a thick, smooth paste which can be liquid or solid depending on the storage temperature. Cocoa liquor is also referred to as chocolate liquor.

Cocoa Mass
Cocoa mass is yet another term for cocoa liquor (a combination of cocoa butter and cocoa solids resulting from the grinding of cocoa nibs).

Cocoa Solids
Cocoa solids typically refers to the non-fat solids found in chocolate liquor, but it may also refer to the total cocoa content. 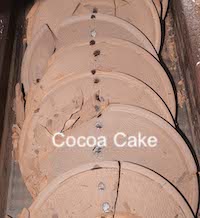 Cocoa vs. Cacao
There is difference of opinion but there seems to be some consensus that cacao refers to the living cacao tree, cacao pod and the cacao bean in its natural state before fermentation and roasting. Many people use the terms interchangeably. 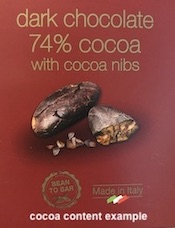 The cocoa content of a chocolate product is the percentage by weight of the product that is directly derived from the cocoa beans (i.e. a combination of cocoa liquor, cocoa butter and cocoa powder). A "60%" chocolate bar has 60% of its weight comprised of cocoa liquor and cocoa butter. The other 40% represents other ingredients such as sugar, vanilla and emulsifier. An 80% cocoa content will be a much darker chocolate, as there would be more cocoa liquor with typically a more intense flavor profile. If any extra cocoa powder or butter is added that is also included in the cocoa percentage.

Compound
Compound chocolate is typically made with cocoa powder, sugar and a vegetable fat (coconut oil, palm oil) instead of cocoa butter. Compounds do not require tempering, so they are more versatile to different temperatures than pure chocolate. Our organic low melt compound chunks, for example, are made of organic cane sugar, organic coconut oil, organic alkalized cocoa powder, organic soy lecithin and organic vanilla extract.

Cocoa Butter
Cocoa butter is the fatty component of the cocoa beans. It is mechanically extracted from the cocoa liquor via pressing. Cocoa butter is 100% vegetable fat that typically melts at body temperature, 98.6°F. 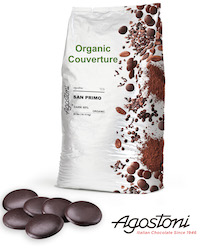 Couverture is chocolate with a higher cocoa butter (32-39%) content than your typical baking or eating chocolate. The smooth and silky mouthfeel of a premium chocolate couverture is due to a refining process. Couverture is meant to be melted and tempered for further use such as enrobing, dipping, etc.

Dark Chocolate
In the purest sense, dark or bittersweet chocolate is made of 5 ingredients: cocoa liquor, sugar, cocoa butter, vanilla and an emulsifier (for example: soy lecithin). Cocoa liquor does contain cocoa butter, but more is added to make the chocolate richer. Sugar is added to counteract the bitterness of the cocoa liquor, and vanilla evens out the taste. The emulsifier is added to chocolate to help bind the fatty to the non-fatty ingredients, to improve viscosity (“flowability”) of the chocolate when melted, and to provide a pleasant mouth feel. Chocolate can be made without emulsifier and in this case is typically made with extra cocoa butter. Agostoni offers chocolate without added emulsifier (soy lecithin) due to soy allergen concerns. For more information, you can find the federal regulations here, CFR 163.123. 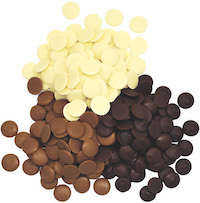 Milk Chocolate
Milk chocolate contains dairy solids (milk powder) in addition to cocoa liquor, sugar, cocoa butter, vanilla and an emulsifier. In the U.S., milk chocolate must contain a minimum of 10% cocoa liquor (CFR 163.130). The organic dairy ingredients used in Agostoni milk chocolate are sourced in Europe, are non-GMO and come from grass-fed cows most of the year (if supplementation is needed in the winter the cows are fed organic corn).

Global Organics is the exclusive importer of Agostoni brand premium chocolate (chips, chunks and couverture), cocoa power, cocoa butter and cocoa liquor in North America and has worked with the Agostoni family for over twenty years. If you are interested in learning more about Agostoni chocolate, please contact your Global Organics Account Manager or email info@global-organics.com.