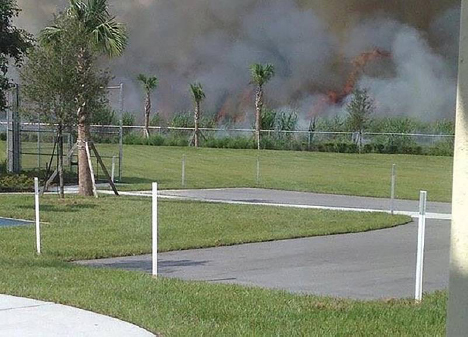 A Rosenwald Elementary School teacher took this undated photo of a sugar cane field burn on a school day just outside the fence surrounding the school grounds in South Bay. (Courtesy to the Miami Herald/TNS)

After nearly six years battling against the outdated, toxic and inherently racist practice of pre-harvest sugar field burning in and around the Everglades Agricultural Area, activists in the Glades and beyond are finally getting attention. The fact that this attention brings with it an avalanche of misinformation is not surprising: U.S. Sugar, vehemently opposed to making operational changes to protect the public health, quality of life and economic prospects of those living in the Glades, are masters at bending the truth.

The reality is that since 2015, the Sierra Club has been working alongside activists living in close proximity to sugar fields that are burned from October into May each year, to advocate for a win-win-win solution to the multitude of negative impacts from pre-harvest sugar field burning. This burn-free solution, called “green harvesting,” involves the use of the mechanical harvesters that Florida sugar growers already use to mechanically separate sugar cane trash (the leaves and tops of the plant) from the sugar-bearing stalk prior to harvest. Where green harvesting is practiced around the world, sugarcane trash is either left on the soil as mulch, or it is separated and collected to be used along with bagasse (the waste product left over after sugarcane refining) to produce electricity, biofuels, biochar, tree-free paper products, cattle feed, medicine and more.

Innovations in biofuels have made sugarcane trash an increasingly attractive feedstock. As I write, Verde Visions is actively looking to set up a facility in South Florida to process sugarcane trash into biofuel designed for the shipping industry. The job creation opportunities associated with the collecting, transporting and processing biomass previously viewed as “trash” should be pursued actively by both the industry and all lawmakers representing the Glades. Green harvest sugar producers in Brazil, Australia, Zimbabwe and everywhere organic sugar cane is grown are profiting because they get value from the “trash” that Florida sugar producers are literally sending up in smoke!

Research published by UF-IFAS found that there is no significant difference between sugarcane yields from burnt and green harvested sugarcane. Furthermore, green harvesting is already regularly used by Florida sugar growers when burn permits are denied because of weather conditions, to comply with USDA organic certification standards, on shallow fields to avoid causing muck fires, and around certain well-connected neighbors. The Clewiston Walmart is one such example. Residents living in the Glades, Ortona and Indiantown are obviously aggrieved because they do not receive the same treatment. Peer through the smoke and the disparate treatment is even more egregious: When the wind blows toward Eastern Palm Beach County burn permits are denied, but wind blowing toward the Glades signals a green light to burn away and a near-constant shroud of smoke and ash over homes, schools, churches and businesses for eight long months.

Erosion and subsidence of muck soils in the Everglades Agricultural Area pose a threat to the long-term viability of agriculture in the region, and yet, annual sugarcane burning increases rates of erosion, depletes water retention and degrades the overall health of sugarcane field soils. Research shows green harvesting can not only defend against soil erosion, but also increase nutrient cycling and carbon sequestration, reduce herbicide costs and reduce runoff from sugar fields into nearby waterways. Water quality is further improved by cutting the atmospherically deposited pollutants from sugar field burning.

Maintaining profitability for Florida sugar producers is important, and green harvesting is not a threat; in fact, research shows that as soils adapt to green-harvesting regimes, the increased nutrient cycling that occurs increases yields over time. The world’s largest organic, regenerative agricultural operation, Natíve Green Cane Project in Sao Paulo, Brazil, switched to green harvesting in the 1980s. It now maintains 20% higher yields than conventional sugarcane.

A change in long-established practices in any industry may incur a costly transition period before the ultimate benefits and profits of innovation may be achieved. Using transition costs as an excuse to avoid protecting the lives and livelihoods of residents in the predominantly Black and brown Glades communities juxtaposed with Big Sugar’s expenditure of $11 million during the 2020 election cycle, makes clear where their priorities lie. If Big Sugar instead diverted these millions toward modernizing their farming practices, the industry, Glades residents and the environment would get that win-win-win.

Rather than partnering with our campaign, the sugar industry has demonized it, but their fear-mongering just crystalizes the truth for more and more Floridians. Take just a few moments to do the research and you will discover that green harvesting is anything but “anti-farming.” As a multi-million dollar industry, Big Sugar’s claim that green harvesting is too difficult, while less wealthy sugar-growing nations around the world have moved beyond sugar field burning, is an insult to American ingenuity and an outright lie.