On May 25th 2016, the FDA issued final guidance on the ingredient known as evaporated cane juice (ECJ). This new guidance calls the term “false and misleading” and advises manufacturers to use “sugar” on labels instead. But what is ECJ? Is it the same as white sugar or something different altogether?

Fully understanding the answer requires a more nuanced knowledge of sugar processing practices. Luckily, we know a lot about sugar so we prepared this primer for you.

The term ECJ was coined in the 1990’s by companies looking for a different way to market cane sugar. Based on the name, logic might assume that someone pressed juice out of sugar cane and boiled it to evaporate the water, end of story. There are sweeteners processed that way called whole cane sugar or panela, rapadura, jaggary and other country specific names. However, this is not the same as the sugar being labeled as ECJ in today’s retail products.

Whole cane sugars are dark brown, large granule, non-centrifugal sugars. Meaning, unlike most other cane sugars, the molasses is not separated out in a centrifuge and remains inside the crystal. Because whole cane sugars have a high molasses content and affinity to absorb water, they are usually not free flowing and are difficult to handle in industrial-scale applications. According to sugar industry definition, this is the only “true” ECJ.

The ingredient usually being called ECJ is actually a crystalline sugar and is processed more similarly to organic cane sugar (whether the ECJ is organic or not). That means after the cane is harvested and crushed, the juice is clarified to remove solids, heated and concentrated to a syrup. Then it’s seeded with sugar crystals to promote crystallization. Once the sugar has crystalized out of the syrup, it’s put in a centrifuge to spin out almost all of the molasses. The cane sugar is then dried and packaged. It is typically over 99% sucrose at this point and is defined as sugar for labeling purposes.

In comparison, conventional white sugar is re-dissolved in water and refined further to remove all traces of molasses. Then it is whitened, often with sulfur dioxide, before being dried and packaged. Because the so-called ECJ is not refined to the extent of conventional white sugar, it retains a bit more molasses and the crystals have a golden color. 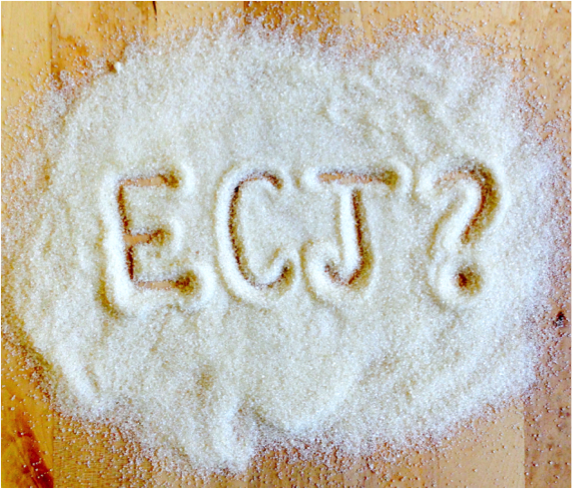 The FDA’s new guidance follows draft guidelines posted in 2009. Both statements state that “evaporated cane juice” is not the common or usual name of any type of sweetener and should not be used. One major difference is that the 2009 draft guidance suggested listing “dried cane syrup” instead of ECJ. The FDA is no longer recommending that wording. The new, final guidance says that the ingredient should be declared as “sugar” and can be “preceded by one or more truthful, non-misleading descriptors if the manufacturer so chooses.” An example of this would be “cane sugar.”

FDA’s reasoning against using “ECJ” has to do with the word “juice.” According to 21 CFR 102.5(a), ingredient names must describe the basic nature of the food and/or its characterizing properties. The agency notes that “evaporated cane juice” is confusingly similar to the common use of “juice,” which is a liquid obtained from plants defined by consumers as fruits or vegetables. ECJ is a crystalline sugar, not a liquid, made from sugar cane, which is not commonly known as a vegetable. The name does not accurately reflect the ingredient.

Over the years leading up to this new guidance, class-action lawsuits have been filed over the use of the term ECJ. Rather than taking issue with the term ‘juice,’ plaintiffs argued that manufacturers use ECJ to imply that it’s healthier than refined sugar and conceal added sugars in their products. Regardless, FDA’s recommendation against using the term makes future lawsuits more likely for manufacturers who continue listing ECJ on product labels.

To answer the original question: ECJ is a granulated crystalline sugar, just like many other cane sugars. How you label it on product labels should reflect the defining characteristic of the ingredient (i.e. include the word “sugar”). For example, we sell organic cane sugar and the name clearly tells you what you’re getting.

Stay tuned for a future post identifying and describing the many different types of cane sugar!